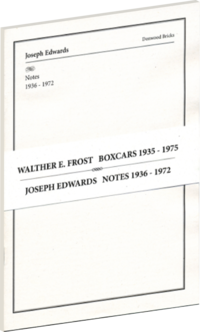 Walther E. Frost was an amateur photog- rapher who produced over 10,000 pictures during his lifetime. One of his favourite mo- tives was the Boxcar. Joseph Edwards was an employee at a Canadian railway company who wrote detailed notes of his everyday life on the tracks. Donwood Bricks fills a small historical gap, which builds a connection between Walther and Joseph.