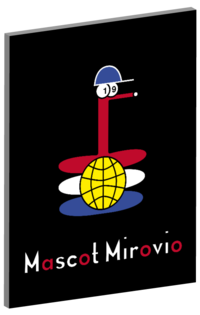 Mascot Mirovio is a transinsect: half bird, half insect. Its vision differs to ours: it can not perceive distances, all objects are in the same range. The non-existing distances create a topographic reality comparable to the digital space. Imagine having two tabs open in the web browser, each tab representing a bundle of geographic locations. The server is somewhere, the content is generated somewhere else and the site is owned by somebody in yet another country. From a human perspective these locations are far from each other, whereas in Mirovio’s perception these places are next to each other, within the same physical location, where it is able to enter them, touch them and interact with them. A cash machine in Fortaleza and an elevator to the train station in Beijing are next to each other. The TV tower in Canberra and the butcher´s in Košice are in front of each other and on the same street.

The images included in this book depict Morovio’s field of vision. They are approximations to Mirovio’s visual perception to give the reader an insight into its marvellous and friendly universe.